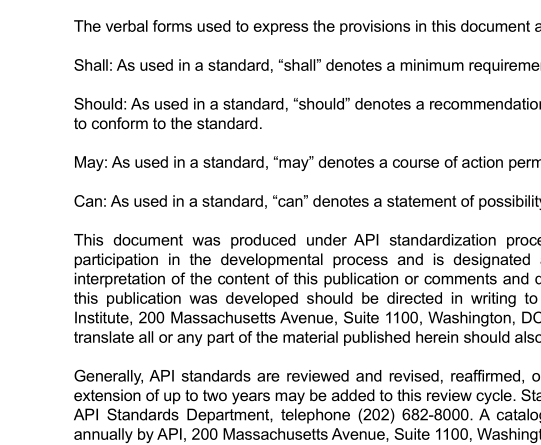 API MPMS 23.2 2020 pdf download.Manual of Petroleum Measurement Standards Chapter 23.2.
3 Terms and Definitions For the purposes of this document, the following terms and definitions apply. 3.1 action limits Lines on a control chart that represent a boundary between taking or not taking action to modify a process. 3.2 central mean value The average or standard value of the data being plotted on a control chart and is the reference value from which control limits are determined. 3.3 control chart A graphical method for evaluating whether a process is in or out of a state of statistical control by using warning and action limits determined by statistical analysis of the process data. 3.4 control chart loss/gain (L/G) A graphical method for evaluating whether L/G and/or meter proving operations are in or out of a “state of statistical control.” 3.5 control chart or log of fixed limit A control chart or log whose control limits are based on adopted fixed values applicable to the statistical measurements displayed on the log or chart. Historically, fixed limits have been used to control the limits on meter factor changes. 3.6 control limits Lines on a control chart used to evaluate whether or not a process is in statistical control. 3.7 repeatability A measure of the agreement between the results of successive measurements of the same variable carried out by the same method, with the same instrument, at the same location, and within a short period of time. 3.8 standard deviation The root mean square deviation of the observed value from the average.
3.10 systems tolerance limits Control limits that define the extremes or conformance boundaries for variations to indicate when an audit or technical review of the facility design, operating variables, and/or computations may need to be conducted to determine sources of errors and changes that may be required to reduce variations. Tolerance limits are normally based on 99 % or greater confidence levels and are used interchangeably with upper and lower control limits (UCLs and LCLs, respectively). 3.11 three standard deviation limit A control limit equal to three standard deviations from the arithmetic mean of the set. 3.12 transloading The transfer of a liquid hydrocarbon commodity from one bulk carrier to another bulk carrier where the quantity and quality transferred is measured via a measurement system. 3.13 warning limits Lines on a control chart that represent a boundary between a predictable and unpredictable process. 4 Measurement Data Analysis 4.1 General Data may be presented in the form of control charts, trending charts, or cumulative charts. Guidelines on such charts may include control limits and trending lines. Charts used for monitoring measurement systems should be living documents and should be updated whenever new data are available. Accumulating data for some period of time and periodically updating charts (e.g. semiannually) serves no useful purpose. Charts and monitoring procedures can be effective only if charts are current and used as constructive tools.
When expressed in percent, the actual L/G quantity is divided by the quantity of total receipts for a receipt-based system or by the quantity of total deliveries for a delivery-based system and multiplied by 100. NOTE In the equations above, variables shall be expressed in like units of measure. Variables calculated under the same conditions [e.g. gross standard volume (GSV)/net standard volume (NSV), standard temperature and pressure] will yield the most meaningful information. (Reference API MPMS Ch. 12.) 4.3 Control Charts General Good measurement can be ensured by continuously monitoring measurement results to determine if systems, or equipment and procedures, are performing in predictable ways and are operating within acceptable limits. This may be done using control charts. Control limits are often determined by historical performance of the system. In other cases, the control limits are set on an established arbitrary value, e.g. contractual limits. Control charts are the most common method of ascertaining system L/G performance. Control charts display a collection of data over some period of time and include the control limits. Control charts help to define normal trends of a system and may indicate when something has changed. Typical L/G charts, as shown in Figure 1, indicate a system’s performance based on a percentage of throughputs over time. Typically, because accounting systems encompass a 30-day period, monthly evaluations of a system are commonly used to evaluate performance. Control charts may be prepared for any time span (e.g. weekly or daily) if adequate data are available.