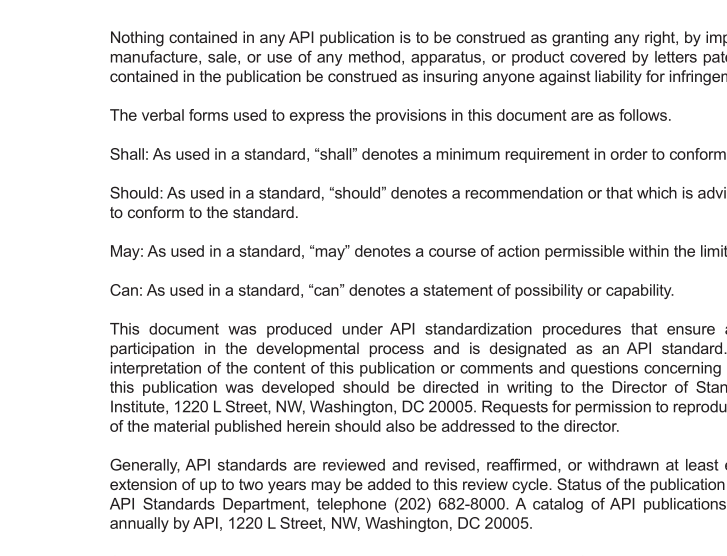 API MPMS 22.4 2018 pdf download.Manual of Petroleum Measurement Standards, Chapter 22.4 Testing Protocol for Pressure, Differential Pressure, and Temperature Measuring Devices.
Scope This testing protocol documents the method for testing the performance characteristics specific to pressure, differential pressure, and temperature sensors and transmitters used in petroleum measurement. The testing protocol includes a listing of parameters affecting the performance of the devices, a description of the tests required, requirements for the test facility, a data reporting format, and an uncertainty determination methodology. Normative References The following referenced documents are indispensable for the application of this document. For dated references, only the edition cited applies. For undated references, the latest edition of the referenced document (including any amendments) applies. ISO/IEC 17025:2005, General requirements for the competence of testing and calibration laboratories IEC 60770-2: 2010, Transmitters for use in industrial-process control systems—Part 2: Methods for inspection and routine testing ISO/IEC Guide 98-3 (GUM:1995): 2008, Uncertainty of measurement—Part 3: Guide to the expression of uncertainty in measurement Terms and Definitions 3.1 Hysteresis The difference between the indications of a measuring instrument when the same value of the quantity measured is reached by increasing or decreasing the quantity. 3.2 API 22.4 baseline accuracy A measure of the accuracy at a near ambient temperature determined by the testing procedure defined in this document. The API 22.4 baseline accuracy is calculated from the combination of the linearity, hysteresis and repeatability data calculations. API 22.4 baseline accuracy is used to compare the result to other transmitters tested at the same time and is also used in the calculation of influence factor effects. 3.3 Analog signal A signal that varies continuously in amplitude rather than in discrete steps.
3.6 Linearity The degree to which a response function describing the input-output relationship between a measured quantity and the signal produced by the measuring device can be described by a straight line. 3.7 Rangeability The capability of a measuring device to measure between a minimum and maximum input within an acceptable tolerance. Rangeability is generally expressed as the ratio of the maximum to the minimum. 3.8 Repeatability Measure of the agreement between the results of successive measurements of the same variable carried out by the same method, with the same instrument, at the same location, and within a short period of time. 3.9 Uncertainty (of measurement) The amount by which an observed or calculated value may depart from the true value. 3.10 Zero Measurand Output Zero The signal of a sensor with zero measurand applied. 3.11 Slope The ratio of the output signal to the measured variable between the zero value and the span value of a transmitter. Field of Application The field of application for this testing protocol is limited to devices that are used in the measurement of hydrocarbon fluids in the petroleum, energy, and petrochemical industries. Parameter Variations Affecting Device Performance 5.1 API 22.4 Baseline Tests In order to identify the performance changes resulting from changes in the operating condition, the baseline test is required, see 6.4. The following measures of performance are calculated from the baseline test: — Accuracy — Linearity — Repeatability — Hysteresis
5.2 Influence Testing Influence testing quantifies the environmental effect and the dynamic performance of pressure, differential pressure, and temperature measuring devices including: — Ambient Operating Temperature Influence — Pressure Operating Influence on Differential Pressure Transmitter Maximum Pressure/Differential Pressure Testing — Pressure Maximum Operating Pressure for Pressure Transmitter — Pressure Maximum Operating Pressure for Differential Pressure Transmitter — Differential Pressure Maximum Operating Differential Pressure for Differential Pressure Transmitter 5.3 Special Testing Special testing quantifies the effect of external mechanical and electrical conditions that may affect the performance of pressure, differential pressure, and temperature measuring devices. These tests are covered in 6.6. Tests The following sections describe API 22.4 testing requirements for pressure, differential pressure, and temperature transmitters. Test applicability is indicated in the test name and in Table 1.