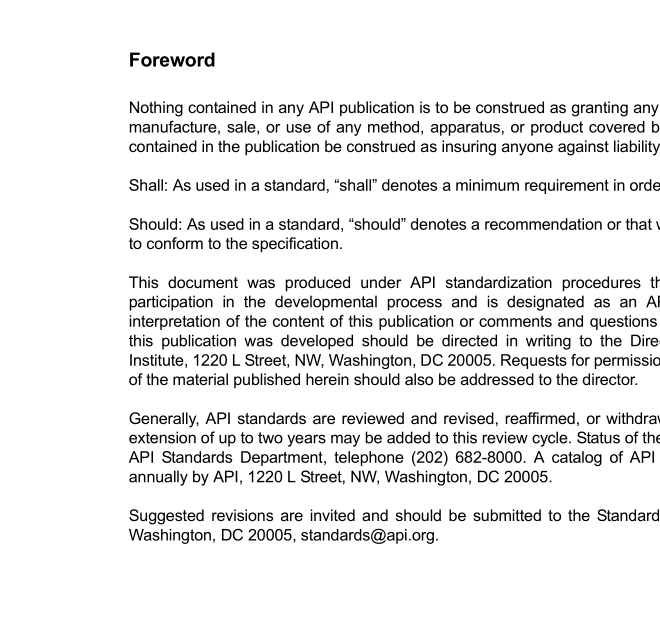 API MPMS 22.3 2015 pdf download.Manual of Petroleum Measurement Standards Chapter 22.3 Testing Protocol for Flare Gas Metering.
1 Scope The scope of the standard is to describe a testing protocol for flare gas meters. This includes a discussion of the testing to be performed, how the test data should be analyzed, and how an uncertainty is determined from the testing of the meter. The scope does not include the general guidelines to flare gas metering that are covered under MPMS Chapter 14.10. 2 Normative References The following referenced documents are indispensable for the application of this document. For dated references, only the edition cited applies. For undated references, the latest edition of the referenced document (including any amendments) applies. API Manual of Petroleum Measurement Standards (MPMS), Chapter 14.3 Part 1, Concentric, Square-Edged Orifice Meters—Part 1: General Equations and Uncertainty Guidelines ISO/IEC Guide 98-3:2008 1 , Uncertainty of Measurement—Part 3: Guide to the Expression Uncertainty in Measurement (GUM: 1995) ISO/IEC 17025; 2005, General requirements for the competence of testing and calibration laboratories 3 Terms and Definitions For the purposes of this document, the following definitions apply. 3.1 accuracy The ability of a measurement instrument to indicate values closely approximating the true value of the quantity measured. 3.2 adiabatic expansion Expansion of gas that occurs without loss or gain of heat. 3.3 calibration The process or procedure of adjusting an instrument, such as a meter, so that its indication or registration is in satisfactorily close agreement with a reference standard. 3.4 D The published inside pipe diameter. 3.5 dynamic performance A general expression for the relationship between the volume or mass registered by a meter and the true value after a change in flow rate, flowing temperature or flowing pressure.
3.6 dynamic response The time required for a meter to register 63.2 % of the difference between its old and new value after a change in flow rate, flowing temperature or flowing pressure. 3.7 flow disturbance Any change in the swirl or asymmetry of the velocity profile capable of changing the output of the meter. 3.8 hysteresis The difference between the indications of a measuring instrument when the same value of the quantity measured is reached by increasing or decreasing the quantity. 3.9 isentropic exponent A thermodynamic state property that establishes the relationship between an expanding fluid’s pressure and density as the fluid flows through the sensing element. 3.10 linearity Meter linearity is expressed as the total range of deviation of the accuracy curve from a straight line between the minimum and maximum recommended flow rates. 3.11 rangeability The capability of a meter or flow measuring device to operate between the minimum and maximum flow range within a specified uncertainty; expressed as the ratio of maximum flow to the minimum flow. 3.12 reference standard (metering) The facility measuring instrument, which is traceable to national and/or international standards, intended to define, to represent physically, or to reproduce the unit of measurement of a quantity (or a multiple or submultiple of that unit), in order to transmit it to other measuring instruments. 3.13 repeatability A measure of the agreement between the results of successive measurements of the same variable carried out by the same method, with the same instrument, at the same location, and within a short period of time. 3.14 sensing element The part of the sensor (or detector) that is responsive to the magnitude of the measured quantity. 3.15 uncertainty The amount and probability by which an observed or calculated value may depart from the true value.
5 Parameter Variations Affecting Device Performance As discussed in API MPMS Chapter 14.10 there are many parameters that may affect the performance of the device. The key parameters that will best define the performance of the Flare Flow Meter System (FFMS) metering component include but are not limited to the following: — pressure; — temperature; — gas composition; — environmental conditions; — installation conditions such as upstream piping disturbances (influences will vary between different meter technologies); — velocity; — Reynolds Number; — phase changes. 6 Mandatory Tests 6.1 Test Conditions Written procedures should be developed by the testing facility and agreed by the party requesting the test prior to the start of any testing. The sequence of tests should be considered and any tests that can alter device performance should be completed last. All deviations from written procedures or standards shall be documented.