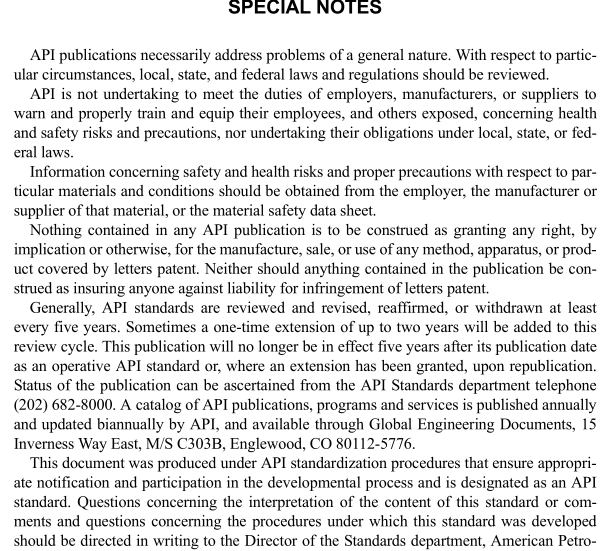 API MPMS 22.2-2012 pdf download.Manual of Petroleum Measurement Standards Chapter 22—Testing Protocol Section 2—Differential Pressure Flow Measurement Devices.
1.0 Introduction This document defines the testing and reporting protocols for flow measurement devices based on the detection of a pressure differential that is created by the device in a flowing stream. This protocol is designed to supply industry with a comparable description of the capabilities of these devices for the measurement of single-phase fluid flow when they are used under similar operating conditions. The objectives of this Testing Protocol are to: 1. Ensure that the user of any differential pressure flow meter knows the performance characteristics of the meter over a range of Reynolds numbers as applicable or defined by tests, 2. Facilitate both the understanding and the introduction of new technologies, 3. Provide a standardized vehicle for validating manufac- turer’s performance specifications, 4. Provide information about relative performance charac- teristics of the primary elements of the differential pressure metering devices under standardized testing protocol. 5. Quantify the uncertainty of these devices and define the operating and installation conditions for which the stated uncertainties apply. To accomplish these objectives, the testing protocol defines the test limits for operating conditions of the meter, the requirements of the facility or facilities to perform the tests, the fluids to be tested, and the ranges for pressure, dif- ferential pressure, temperature, secondary instrumentation, and Reynolds number.
1.1 SCOPE The testing protocol is limited to single-phase Newtonian fluid flow, and no consideration is given to pulsation effects. Further revisions of this document may include the testing of such meters in wet gas or multi-phase service and the effects of pulsation. This standard does not address testing protocols of those devices that operate on the principle of critical or choked flow condition of fluids. The testing protocol covers any flow meter operating on the principle of a local change in flow velocity, caused by the meter geometry, giving a corresponding change of pressure between two reference locations. There are several types of differential pressure meters available to industry. It is the pur- pose of this standard to illustrate the range of applications of each meter and not to endorse any specific meter. The basic principle of operation of the flow measuring devices follows the physical laws relating to the conservation of energy and mass for the fluid flows through the device. Any existing or later developed API MPMS document addressing a specific type or design of differential pressure flow measuring device will supersede the requirements of this document. An example of one such existing standard is API Manual of Petroleum Measurement Standards, Chapter 14.3 “Concentric, Square-Edged Orifice Meters.”
2.1 meter: A meter is the assembly of a primary element, a differential producer holder with the upstream and down- stream meter tubes that will generate a differential pressure when placed in a flow stream. The differential pressure is monitored by secondary device(s) (section 2.6) to derive the flow rate. 2.1.1 meter asymmetry: Meter asymmetry refers to the orientation of specific items in the meter in this document. For example, it may refer to the position of the differential tap holes, or the orientation of supports within the meter which are not symmetrically placed throughout the diameter. 2.2 primary element or differential producer: The primary element is defined as the differential producer when placed in a flowing stream. 2.3 differential producer holder: The differential pro- ducer holder is defined as a pressure containing piping ele- ment used to contain and position the differential producer and its associated differential pressure sensing taps in the pip- ing system. An orifice fitting would be an example of such a device. 2.4 meter tube: The meter tube is defined as the straight sections of pipe, including all segments that are integral to the differential producer holder, upstream and downstream of the differential producer and the flow conditioner, if required. 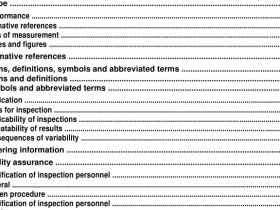