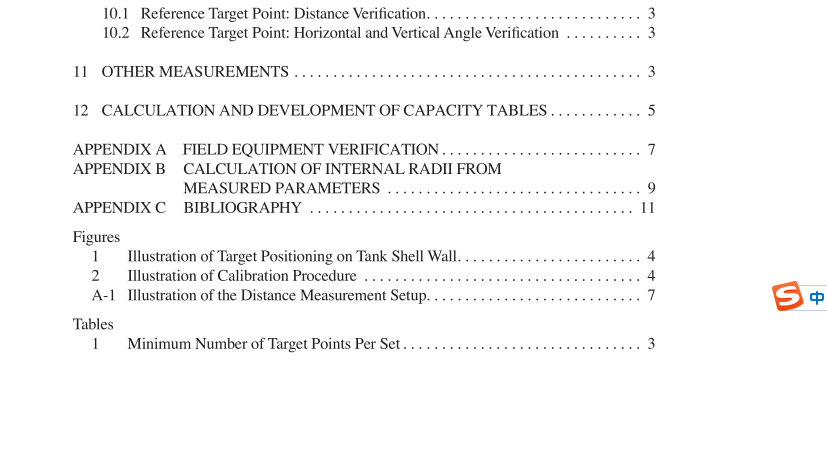 API MPMS 2.2D-2003 pdf download.Manual of Petroleum Measurement Standards Chapter 2—Tank Calibration Section 2D—Calibration of Upright Cylindrical Tanks Using the Internal Electro- optical Distance Ranging Method.
The method described in this part of API MPMS Chapter 2 is an alternative to other tank calibration methods such as the strapping method (API MPMS Chapter 2, Section 2A), the optical-reference-line method (API MPMS Chapter 2, Sec- tion 2B) and the optical-triangulation method (API MPMS Chapter 2.2C). The parts of Chapter 2 form part of a series on tank calibra- tion which also includes: Standard 2551, Measurement and Calibration of Horizontal Tanks; Standard 2552, Measure- ment and Calibration of Spheres and Spheroids; Standard 2554, Measurement and Calibration of Tank Cars ; Standard 2555, Liquid Calibration of Tanks; Recommended Practice 2556, Correcting Gauge Tables for Incrustation; MPMS Chapter 7, Calibration of Barge Tanks; MPMS Chapter 2.8A, Calibration of Tanks on Ships and Oceangoing Barges; MPMS Chapter 2.8B, Establishment of the Location of the Reference Gauge Point and the Gauge Height of Tanks on Marine Tank Vessels. 1 Scope 1.1 This part speciÞes a method for the calibration of upright cylindrical tanks having diameters greater than 5 m by means of internal measurements using an electro-optical distance-ranging instrument, and for the subsequent compila- tion of tank capacity tables. This method is known as the internal electro-optical distance-ranging (EODR) method. 1.2 This part of Chapter 2 is not applicable to the calibra- tion of abnormally deformed (e.g. dented) tanks or of noncir- cular tanks. 1.3 This part of Chapter 2 is applicable to tanks tilted by < or = 3 % from the vertical, provided a correction is applied for the measured tilt as described in Chapter 2.2A. 1.4 This part of Chapter 2 is applicable to tanks with cone- up or cone-down bottoms, as well as to tanks with ßat bot- toms. 2 Normative References The following standards contain provisions which, through reference in this text, constitute provisions of this part of Chapter 2. At the time of publication, the editions indicated were valid. All standards are subject to revision, and parties to agreements based on this part of Chapter 2 are encouraged to investigate the possibility of applying the most recent editions of the standards indicated below. Members of API maintain registers of currently valid API Standards. API Manual of PetroleumMeasurement Standards (MPMS) Chapter 2.2A ÒMeasurement and Calibration of Upright Cylindrical Tanks by the Manual Strapping MethodÓ Chapter 2.2B ÒCalibration of Upright Cylindrical Tanks Using the Optical Reference Line MethodÓ Chapter 2.2C Calibration of Upright Cylindrical Tanks Using the Optical Triangulation MethodÓ IEC 1 825-1:1993 Safety of laser products—Part 1: Equip- ment Classification, Requirements and User’s Guide 3 Definitions For the purposes of this part of Chapter 2 the deÞnitions given in API MPMS Chapter 2.2A and the following deÞni- tions apply. 3.1 reference target point: Fixed point clearly marked on the inside surface of the tank shell wall. 3.2 slope distance: Distance measured from the electro- optical distance-ranging instrument to a target point on any given course of the tank shell wall. 3.3 target point: One of a series of points on the inside surface of the tank shell wall to which slope distance, vertical and horizontal angles are measured by use of the electro-opti- cal ranging instrument. 4 Precautions The general and safety precautions contained in API MPMS Chapter 2.2A shall apply to this standard. In addition, the laser beam emitted by the distance-ranging unit shall conform to IEC 825 for a class 1 laser.
5 Equipment 5.1 ELECTRO-OPTICAL DISTANCE-RANGING INSTRUMENT 5.1.1 The angular measuring part of the instrument shall have an angular graduation and resolution equal to or better than ± 0.0002 gon*, a repeatability equal to or better than ± 0.0005 gon, and an uncertainty equal to or better than ± 0.001 gon. 2 . 5.1.2 The distance-measuring part of the instrument, used for direct determination of the distances, shall have a gradua- tion and resolution equal to or better than ± 1 mm, a repeat- ability equal to or better than ± 2 mm, and an uncertainty equal to or better than ± 2 mm. 5.2 INSTRUMENT MOUNTING consisting of a tripod which is Þrm and stable. The legs of the tripod shall be held Þrm, and steadied by suitable devices such as magnetic bearers. 5.3 LASER BEAM EMITTER having a low-power laser beam complying with IEC 825, which is either an integral part of the EODR instrument or a separate device. If the laser beam emitter is a separate device, it may be Þtted with a Þber optic light transmitter system and a theodolite telescope eye- piece connection, by which the laser beam may be transmit- ted through a theodolite, or such that it may be Þtted to a theodolite with its axis parallel to the axis of the theodolite. The laser beam may be coincident with the optical axis of the telescope