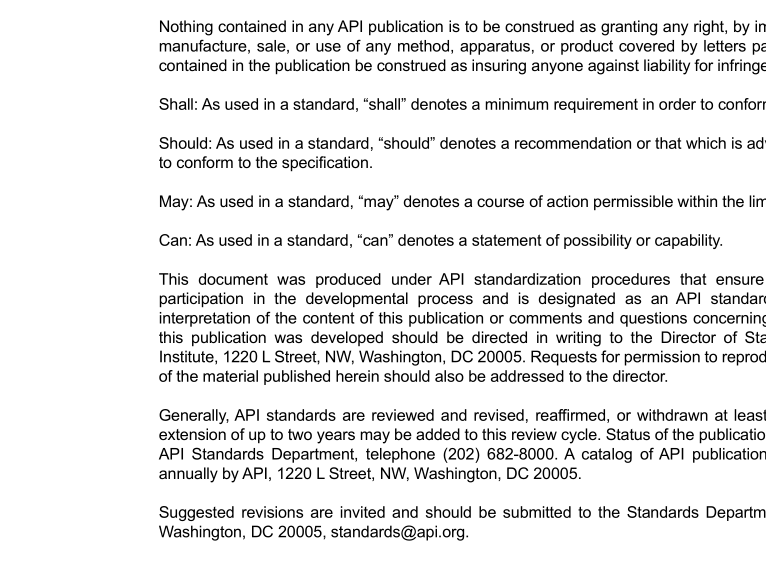 API MPMS 19.6.1 2017 pdf download.Manual of Petroleum Measurement Standards Chapter 19.6 Part 1—Evaporative Loss from Storage Tank Floating-roof Landings.
1 Scope The emissions characterized as floating-roof landing losses in this study are those that would be expected to occur if a floating roof is landed in the course of normal operations and subsequently refilled. This study does not address emissions that may result from additional activities, such as degassing or tank cleaning, that may occur while the tank is empty. The model is intended for use with any petroleum liquid. The inclusion in the model of the stock liquid’s physical properties (i.e. true vapor pressure, vapor molecular weight, and liquid density) appears to effectively differentiate crude oil from gasoline, and therefore no further differentiation was made in the form of product factors or other product-specific adjustments. The model does not directly address standing idle losses for partial days, but it would be reasonable to estimate the emissions for a partial day by estimating the standing idle emissions for a single day and then prorating that estimate by the number of hours that the floating roof was actually landed. Any emission factor is properly understood as representative of the actual emission rates that are typical for a population of emission points. For a non-uniform population, however, there is an inherent level of uncertainty associated with the application of the general emission factor to any individual emission point. Some of the critical sources of uncertainty in this model of floating-roof landing losses are addressed in the comments on the confidence associated with each step of the model. As noted in these comments, some of the variables have not been well defined, and the values shown are intended to serve only as placeholders—pending further research. 2 Normative References The following documents are indispensable for the application of this document. For dated references, only the edition cited applies. For undated references, the latest edition of the referenced document (including any amendments) applies.
A tank only qualifies as a drain-dry tank if all of the free-standing liquid has been removed. If the tank drains to a sump, but a heel of free-standing liquid is left in the sump, then the tank would be considered to have a partial liquid heel. Flat bottom tanks that have most of the free-standing liquid removed by means of a vacuum truck typically have pools of liquid remaining and should generally be considered to have a partial heel as well. 4.3 Filling Loss Each of these categories experiences filling loss in addition to the standing idle loss. The filling loss is assumed to include vapors from two sources. The first source is those vapors that remain under the floating roof at the end of the standing idle period. These are the vapors residing in the vapor space immediately prior to the introduction of incoming stock liquid and are referred to as the arrival component of vapors. Additional vapors are generated by the incoming liquid itself. This source is referred to as the generated component of vapors. Each of these vapor components may be represented by a saturation factor applied to the vapor space volume.
6 Description of Floating-roof Landing Losses 6.1 Landing Loss Events The emissions associated with each episode of landing a floating roof and subsequently refilling the tank may be categorized as occurring in two distinct events. The first is driven by the evaporation of stock liquid that remains in the bottom of the tank while the floating roof is landed. This event shall be termed standing idle loss. The other event is the displacement of stock vapors from under the floating roof when the tank is refilled. This event shall be termed filling loss. The total emissions for a given episode are then the sum of the standing idle loss and the filling loss for that episode. To estimate the annual emissions associated with floating-roof landings for a particular tank, the emissions would be summed from each of the floating-roof episodes that occurred that year. Any freely vented floating-roof tank would be expected to have landing losses if the floating roof is landed, regardless of whether the tank is an IFRT, EFRT, or a covered (domed external) floating-roof tank (CFRT). While the tank construction will influence the estimated magnitude of the landing losses, there is no difference in the emissions mechanisms for IFRTs versus CFRTs, and thus for purposes of this discussion CFRTs are included with IFRTs.