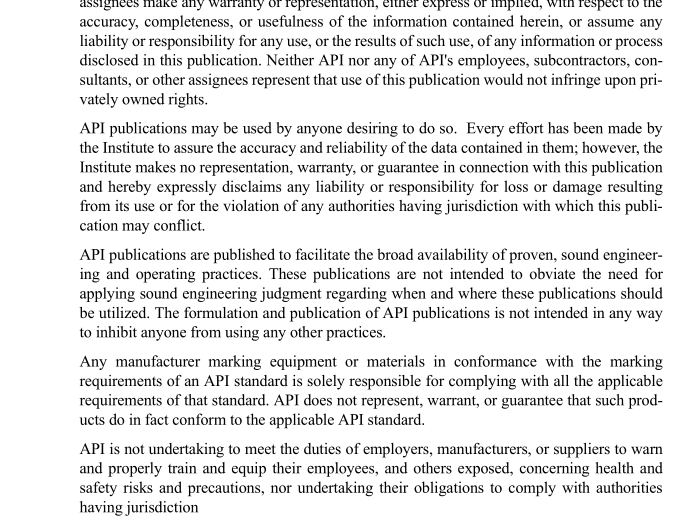 API MPMS 14.1 2006 pdf download.Manual of Petroleum Measurement Standards Chapter 14—Natural Gas Fluids Measurement Section 1—Collecting and Handling of Natural Gas Samples for Custody Transfer.
4 Definitions 4.1 absorption: Occurs when natural gas constituents are dissolved into a liquid or solid that is not considered to be the mix- ture’s liquid phase. 4.2 adsorption: Occurs when a thin film of molecules adheres to a liquid or solid surface. 4.3 chilled mirror test: Used to determine dew points (water and/or hydrocarbon) by passing the natural gas over a mirror while gradually reducing the temperature of the mirror until condensation forms. A Bureau of Mines-type of dew point apparatus is commonly used for chilled mirror tests. 4.4 cricondenbar: The point of maximum pressure on a hydrocarbon dew point curve. This is the highest pressure at which a hydrocarbon mixture can exist separately as gas and liquid. 4.5 cricondentherm: The point of maximum temperature on a hydrocarbon dew point curve. The cricondentherm is the highest temperature at which hydrocarbon vapor can condense to form liquid. 4.6 cricondentherm pressure: The pressure at which the cricondentherm occurs on a hydrocarbon dew point curve. 4.7 continuous sampling systems: Provide for an uninterrupted flow of sample. 4.8 de-sorption: Occurs when adsorbed or absorbed molecules are released from a liquid or solid surface. 4.9 extension tube (“pigtail”): A piece of tubing placed on the end of a sample container used to move the point of pressure drop (point of cooling) away from the sample being acquired. 4.10 floating piston cylinder: A container which has a moving piston that has its forces balanced by a pre-charge pressure. 4.11 flow-proportional composite sampling: The process of collecting gas over a period of time at a rate that is propor- tional to the pipeline flow rate. 4.12 gas sample distortion: Any effect that results in a sample that is not representative of the gas stream.
4.15 hydrocarbon dew point: A temperature at a given pressure at which hydrocarbon vapor condensation begins. 4.16 hydrocarbon dew point curve: A curve connecting all points on a temperature-pressure diagram where a hydrocar- bon vapor begins to condense into liquid. 4.17 lag time in a sample system: The time required for a molecule to migrate from the inlet of the sample probe to the inlet of an analyzer. 4.18 mobile sampling system: The system associated with a portable gas chromatograph. 4.19 multi phase flow: Defined as two or more phases in the stream. 4.20 normal condensation: Caused by an increase in pressure or a decrease in temperature. 4.21 normal vaporization: Caused by a decrease in pressure or an increase in temperature. 4.22 phase: A physical state of a compound (e.g., solid, liquid, or gas). Each phase has a distinct molecular arrangement and can be readily identified (like the two phases of H 2 O in ice water—solid and liquid). 4.23 phase behavior: Refers to the condensation and vaporization characteristics of a hydrocarbon mixture. It includes con- siderations such as temperature, pressure, composition, relative amounts of the liquid and gas phases. 4.24 pitot probe: An impact device with an inlet and return port that provides flow to a hot loop by converting velocity into a differential pressure. 4.25 re-circulation region (“eddy”): An area within a piping system where gas is not continually being replaced even though gas is flowing through the system. 4.26 representative gas sample: Compositionally identical, or as near to identical as possible to the sample source stream. 4.27 residual impurities: Any substances, such as air or natural gas components, that are left in a sample cylinder. 4.28 retrograde condensation: Caused by a decrease in pressure or increase in temperature. 4.29 retrograde vaporization: Caused by an increase in pressure or decrease in temperature.