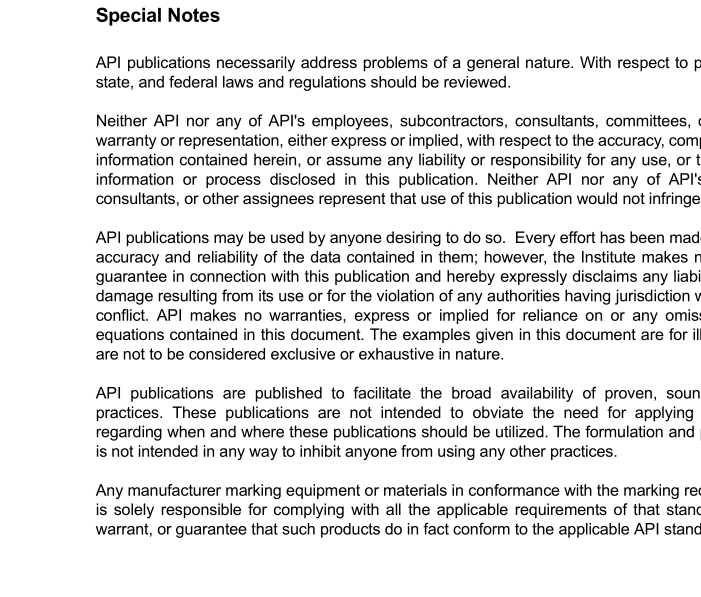 API MPMS 11.5-2009 pdf download.Manual of Petroleum Measurement Standards Chapter 11—Physical Properties Data Section 5—Density/Weight/Volume Intraconversion Part 1—Conversions of API Gravity at 60 °F Adjunct to: ASTM D1250-08 and IP 200/08.
This revised standard is effective upon the date of publication and supersedes the applicable parts of API MPMS Ch. 11.1-1980, Volumes XI/XII. However, due to the nature of the changes in this revised standard, it is recognized that guidance concerning an implementation period may be needed in order to avoid disruptions within the industry and ensure proper application. As a result, it is recommended that this revised standard be utilized on all new applications no later than TWO YEARS after the publication date. An application, for this purpose, is defined as the point where the calculation is applied. Once the revised standard is implemented in a particular application, the previous standard will no longer be used in that application. However, the use of API standards remains voluntary and the decision on when to utilize a standard is an issue that is subject to the negotiations between the parties involved in the transaction. 1 Scope These intraconversion tables are applicable to all crude oils, petroleum products, and petrochemicals. 2 References The following referenced documents are indispensable for the application of this document. For dated references, only the edition cited applies. For undated references, the latest edition of the referenced document (including any amendments) applies. API MPMS Chapter 11.1-2004, Temperature and Pressure Volume Correction Factors for Generalized Crude Oils, Refined Products, and Lubricating Oils API MPMS Chapter 11.4.1-2003, Density of Water and Water VCFs for Volumetric Meter Proving API MPMS Chapter 15-2001, Guideline for the Use of the International System of Units (SI) in the Petroleum and Allied Industries
3 Definitions and Abbreviations 3.1 Definitions 3.1.1 absolute density The density of a substance is the mass of the substance occupying unit volume at a specified temperature at atmospheric pressure or equilibrium vapor pressure. Density as so defined is sometimes referred to as “true density” or as “density in vacuo,” or often just plain “density.” When reporting density, the units of mass and volume used and the temperature of the determination must be stated (e.g. kilograms per cubic metre or grams per millimetre at t °F or t °C). For the oil industry, if the temperature is unstated, standard temperature (60 °F or 15 °C) should be assumed. 3.1.2 API gravity A term used by the petroleum industry to express the relative density of petroleum liquids (also see relative density). The relationship between API gravity and relative density (formerly called specific gravity) is shown in Equation (1). API gravity is a dimensionless number; as it is derived from absolute density, it is “in vacuo.” 3.1.3 apparent density See density in air. 3.1.4 apparent weight See weight in air. 3.1.5 density in air Apparent weight of a substance occupying unit volume. 3.1.6 density in vacuo See absolute density. 3.1.7 grams per cubic centimetre An expression of density in SI (metric) units, also equal to grams per millilitre. 3.1.8 grams per millilitre An expression of density in SI (metric) units, also equal to grams per cubic centimetre. 3.1.9 kilograms per cubic metre An expression of density in SI (metric) units, numerically equivalent to grams per litre. This is the common unit of density currently used in the oil industry. 3.1.10 mass An absolute measure of a particular quantity of matter. Mass is defined in terms of a standard mass, and therefore the mass of an object is simply a multiple of the mass standard. The mass of an object remains constant regardless of its location, whereas weight varies with altitude. The metric unit of mass is the kilogram (kg).