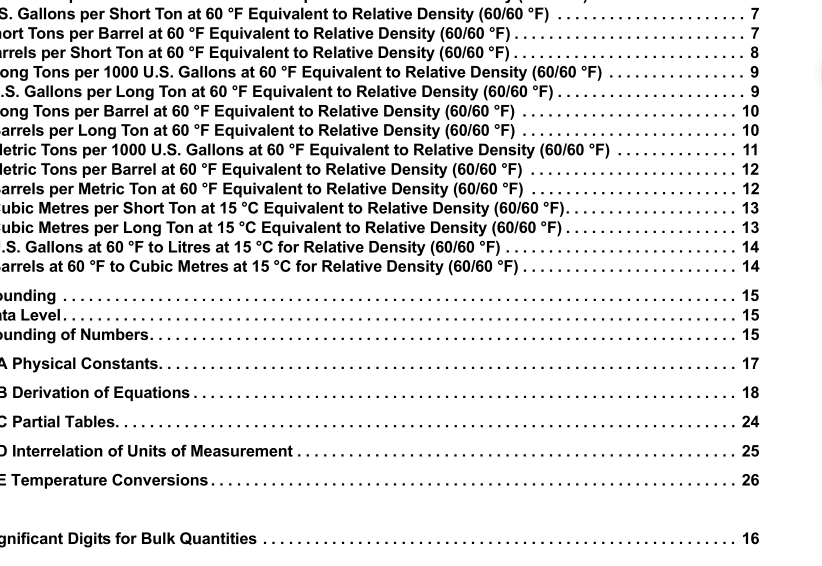 API MPMS 11.5.2 2009 pdf download.Manual of Petroleum Measurement Standards Chapter 11—Physical Properties Data Section 5—Density/Weight/Volume Intraconversion Part 2—Conversions for Relative Density (60/60 °F) Adjunct to: ASTM D1250-08 and IP 200/08.
1 Scope These intraconversion tables are applicable to all crude oils, petroleum products, and petrochemicals. 2 References The following referenced documents are indispensable for the application of this document. For dated references, only the edition cited applies. For undated references, the latest edition of the referenced document (including any amendments) applies. API MPMS Chapter 11.1-2004, Temperature and Pressure Volume Correction Factors for Generalized Crude Oils, Refined Products, and Lubricating Oils API MPMS Chapter 11.4.1-2003, Density of Water and Water VCFs for Volumetric Meter Proving API MPMS Chapter 15-2001, Guideline for the Use of the International System of Units (SI) in the Petroleum and Allied Industries ASTM D1250-1959 1 , Report on the Development, Construction, and Preparation of the ASTM–IP Petroleum Measurement Tables 12th General Conference on Weights and Measures (1964) NIST Handbook 44-2002 Edition 2 , Specifications, Tolerances, and Other Technical Requirements for Weighing and Measuring Devices NIST Handbook 44-2007 Edition, Appendix C NIST Handbook 105-1 (Revised 1990), Specifications and Tolerances for Reference Standards and Field Standard Weights and Measures
3 Definitions and Abbreviations 3.1 Definitions 3.1.1 absolute density The density of a substance is the mass of the substance occupying unit volume at a specified temperature at atmospheric pressure or equilibrium vapor pressure. Density as so defined is sometimes referred to as “true density” or as “density in vacuo,” or often just plain “density.” When reporting density, the units of mass and volume used and the temperature of the determination must be stated (e.g. kilograms per cubic metre or grams per millimetre at t °F or t °C). For the oil industry, if the temperature is unstated, standard temperature (60 °F or 15 °C) should be assumed. 3.1.2 API gravity A term used by the petroleum industry to express the relative density of petroleum liquids (also see relative density). The relationship between API gravity and relative density (formerly called specific gravity) is shown in Equation (1). API gravity is a dimensionless number; as it is derived from absolute density, it is “in vacuo.” 3.1.3 apparent density See density in air. 3.1.4 apparent weight See weight in air. 3.1.5 density in air Apparent weight of a substance occupying unit volume. 3.1.6 density in vacuo See absolute density. 3.1.7 grams per cubic centimetre An expression of density in SI (metric) units, also equal to grams per millilitre. 3.1.8 grams per millilitre An expression of density in SI (metric) units, also equal to grams per cubic centimetre. 3.1.9 kilograms per cubic metre An expression of density in SI (metric) units, numerically equivalent to grams per litre. This is the common unit of density currently used in the oil industry. 3.1.10 mass An absolute measure of a particular quantity of matter. Mass is defined in terms of a standard mass, therefore, the mass of an object is simply a multiple of the mass standard. The mass of an object remains constant regardless of its location, whereas weight varies with altitude. The metric unit of mass is the kilogram (kg).
3.1.11 relative density The ratio of the density of a substance at a specific temperature to the density of a reference substance at a reference temperature. When reporting results, explicitly state the temperatures of each, e.g. 20 °C/4 °C. Formerly known as specific gravity. 3.1.12 specific gravity See relative density. 3.1.13 true weight See weight in vacuo. 3.1.14 volume correction factor VCF The ratio of a liquid’s density at temperature t and pressure p to its density at standard temperature 60 °F and 14.696 pounds per square inch absolute (psia) [or 15 °C and standard pressure 101.325 kilopascals (kPa)] A liquid’s volume at temperature t can be converted to its volume at reference temperature by multiplying volume at temperature t by the VCF at temperature t. For more information, refer to API MPMS Ch. 11.1, Temperature and Pressure Volume Correction Factors for Generalized Crude Oils, Refined Products, and Lubricating Oils. 3.1.15 weight A measure of gravitational force on an object. As gravitational force diminishes with distance from the center of the earth, weight is referenced to mean sea level. This is not to be confused with mass, which is independent of gravity and is directly proportional to the number of atoms or molecules present. The U.S. “customary” unit of weight is the pound (lb). 3.1.16 weight in air The weight which a quantity of liquid would appear to have when weighed in the air against commercial weights which have been standardized so that each will have a weight in a vacuum equal to the nominal mass associated with it. During a weighing, the air exerts a net buoyancy force upon the liquid equal to the mass of air displaced by the liquid minus the mass of air displaced by the weights (for more information, see Section B.4).