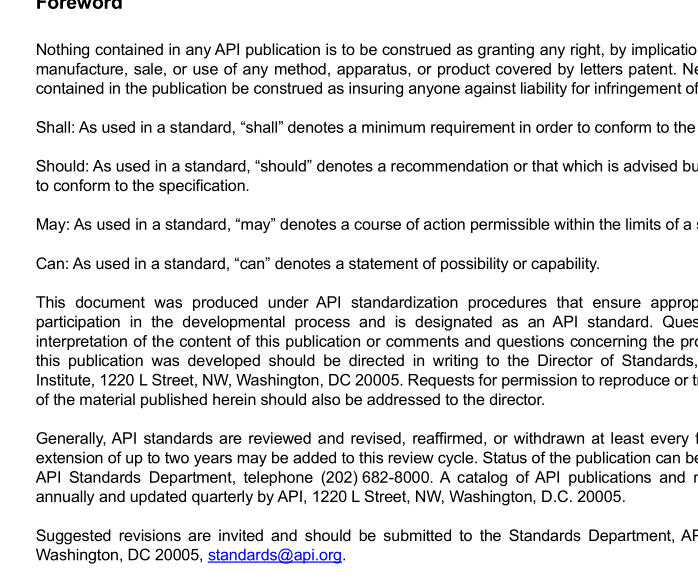 API MPMS 11.4.1 2018 pdf download.Manual of Petroleum Measurement Standards Chapter 11—Physical Properties Data Section 4—Properties of Reference Materials Part 1—Density of Water and Water Volumetric Correction Factors for Water Calibration of Volumetric Provers.
1 Introduction This standard specifies the density of water equation to be used in all applicable API MPMS standards. It also specifies the volume correction factor equation for water and demonstrates its use for water calibration of provers and pycnometers. 2 Scope This standard is applicable to all API standards that use the density of water or its volume correction factors. 3 References The following referenced documents are indispensable for the application of this document. For dated references, only the edition cited applies. For undated references, the latest edition of the referenced document (including any amendments) applies. API MPMS Chapter 11.5 (all parts), Density/Weight/Volume Intraconversions H. Wagenbreth and H. Blanke, “The Density of Water in the International System of Units and in the International Practical Temperature Scale of 1968,” Mitteilungen der Physikalish-Technischen Bunde-sanstalt (PTB–Mitt), 412-415, June 1971. G.S. Kell, Journal of Chemical Engineering Data, 1967, 12, 66–69; ibid, 1975, 20, 97–105. N. Bignell, “The Effect of Dissolved Air on the Density of Water,” Metrologia, 1983, 19, 57–59. J.B. Patterson and E.C. Morris, “Measurement of Absolute Water Density,” Metrologia, 31, 277–288, 1994. M. Tanaka, G. Girard, R. Davis, A. Peuto, and N. Bignell, “Recommended table for the density of water between 0 °C and 40 °C based on recent experimental reports,” Metrologia, 38, 301–309, 2001. W. Wagner and A. Pruss, “The IAPWS Formulation 1995 for the Thermodynamic Properties of Ordinary Water Substance for General Scientific Use,” Journal of Physical and Chemical Reference Data, 31, 2, 387–535, 2002. World Health Organization, Guidelines for Drinking-water Quality, 4 th Edition, 2011. ASTM D1193–2006 1 , Specification for Reagent Water
4 Definitions 4.1 density, absolute The density of a solid or liquid substance at a specified temperature is the mass of the substance occupying unit volume at the specified temperature. Density as so defined is sometimes referred to as “true density” or “density in vacuo.” When reporting density, the units of mass and volume used and the temperature of the determination must be stated (for example, grams per milliliter at t degrees C). 4.2 correction for temperature on liquid CTL Compensates for the effect of temperature on a liquid. 4.3 correction for pressure on liquid CPL Compensates for the effect of pressure on a liquid. 4.4 correction for temperature and pressure on liquid CTPL Volume correction for the effect of temperature and pressure on the density of a liquid (CTPL = CTL × CPL). 4.5 correction for temperature difference of water CTDW Correction for the effect of the difference in temperature of the water between the prover and the test measure during the prover calibration. 4.6 compressibility of liquid F The change in volume per unit of volume of a liquid caused by a unit change in pressure at constant temperature. 5 Significance and Use A prior standard (API MPMS 11.2.3, 1984), which the first edition of this Standard replaced, was based on the internationally accepted work of Wagenbreth and Blanke, which produced a density of 999.012 kg/m 3 at 15.5556 °C (60 °F) and 101.325 kPa (14.696 psia). In 1994, Patterson and Morris published a paper proposing a new equation based on their laboratory data of VSMOW (see Annex B), which was accepted by the U.S. National Institute of Standards and Technology (NIST). This standard, based on the Patterson and Morris work, is applicable between 1 °C and 40 °C (33.8 °F and 104 °F) at standard pressure; 101.325 kPa (14.696 psia). This standard also provides an equation for the compressibility of water based on a compressibility equation contained in a 2001 Tanaka paper.
6.4 Correction for Pressure on Water (CPL) Equation 7 provides a correction for the effects of pressure on water. While it is effective at low pressures, at pressures of 800 kPa or so, the calculated value will exhibit biases relative to accepted water property predictive equations, such as those provided by the International Association for the Properties of Water and Steam that are noticeable within the discrimination identified for CPL in Table 2. CPL is also affected by water temperature. The given equation is effective in the range of 0 °C to 40 °C (32 °F to 104 °F). Beyond these limits of pressure and temperature, the provided CPL calculation uncertainty and/or bias increases significantly and may not meet metrological requirements. The density of deaerated water has been given at an absolute pressure of 101.325 kPa (14.696 psia). Water is slightly compressible, so a correction must be made for pressures other than standard pressure.