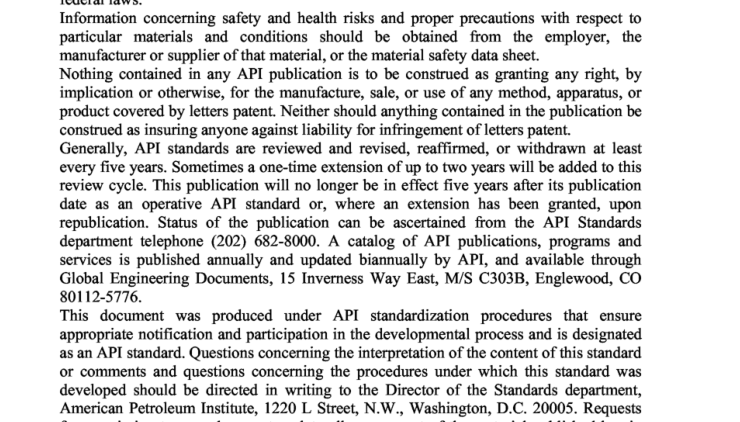 API MPMS 11.1 2004 pdf download.Manual of Petroleum Measurement Standards Chapter I I-Physical Properties Data.
11.1.0 Implementation Guidelines This Standard (Revised Standard) is effective upon the date of publication and supersedes the previous edition of the Standard(s) (Previous Standard(s)) referenced in Appendix A of this Revised Standard. However, due to the nature of the changes in this Revised Standard, it is recognized that guidance concerning an implementation period may be needed in order to avoid disruptions within the industry and ensure proper application. As a result, it is recommended that this Revised Standard be utilized on all new applications no later than TWO YEARS after the publication date. An application for this purpose is defined as the point where the calculation is applied. Once the Revised Standard is implemented in a particular application, the Previous Standard will no longer be used in that application. If an existing application complies with the Previous Standard(s) then it shall be considered in compliance with this Revised Standard. However, the use of API standards remains voluntary and the decision on when to utilize a standard is an issue that is subject to the negotiations between the parties involved in the transaction. 11.1.1 Introduction 8, History The density and therefore the volume of hydrocarbons is sensitive to temperature and pressure. Volume Correction Factors (VCFs) are used to correct observed volumes to equivalent volumes at a standard temperature and pressure. These standard, or base, conditions serve as a way to use volumetric measures equitably in general commerce. This Standard establishes a procedure for crude oils, liquid refined products, and lubricating oils by which density measurements taken at any temperature and pressure can be corrected to an equivalent density at the base conditions. The Standard also provides a method for making a conversion to alternate base temperatures.
11 .I .I .I Correction factors to account for the thermal expansion of liquid hydrocarbons were first formally developed in 1916 by the National Bureau of Standards (United States) under Circular No. 57. These data were based on density and temperature pairs documented in the National Bureau of Standards (NBS) Technologic Paper No. 77. Circular No. 57 was superseded in 1924 by Circular No. C154 which in turn was superseded by a more widely known Circular C410, in 1936. By 1945 The Institute of Petroleum (IP) was publishing the Tables for Measurement of Oil in British units. Early Temperature and Pressure Correction Tables The compressibility standard (API Standard 1 101 , Appendix By Table 11) for hydrocarbons in the O to 90” API gravity ranges was developed in 1945 by Jacobson, et al. It was based on limited data obtained mostly on pure compounds and lubricating oil type materials. Standard 1101 was developed without the aid of a mathematical model. 11 .I .I .2 1952 Temperature Correction Tables In 1952 the British and the American temperature correction factor tables were joined together and made available in three units of measure: US units, British (Imperial) units, and metric units. These tables were called The Petroleum Measurement Tables and were published jointly by the American Society for Testing and Materials (ASTM) and the IP. These tables are commonly referred to as the 1952 Tables, or “Blue Book Tables.”
Tables for lubricating oils, the “D” tables, were developed and released in 1982. They were issued as a FORTRAN program but the API did not publish the implementation procedures. The IP published implementation procedures for the D tables in 1984 as part of their Petroleum Measurement Paper No. 2. Since the 1980 Tables did not deal with the density range for LPGs and NGLs, the 1952 Tables remained in use for these products. This changed in October 1998 with the publication of GPA TP-25, Temperature Correction for the Volume of Light Hydrocarbons, in which the calculation for the temperature correction factor was modified. These tables carry the 23E and 24E designations. The 1980 Tables constituted a major data collection and analysis effort. The NBS performed temperature/density measurements on a set of crude oil and refined product samples that spanned the world. (Refer to Appendix A of Base Data-1980, for more information on this work.) Most importantly, the 1980 Tables replaced the 1952printed Tables with mathematical equations. Because the equations were now the basis for the Standard, the tables could easily be incorporated into computer subroutines via implementation procedures. It is these implementation procedures which the 1980 document made the Standard, not the table of numbers themselves.