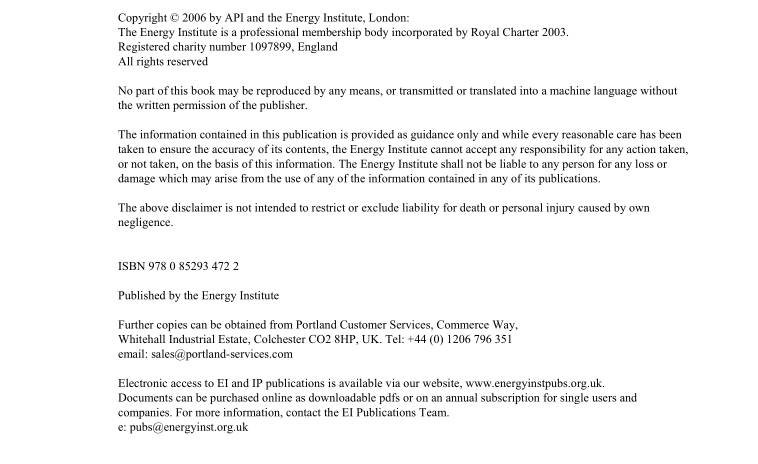 API IP RP 1597-2006 pdf download.PROCEDURES FOR OVERWING FUELLING TO ENSURE DELIVERY OF THE CORRECT FUEL GRADE TO AN AIRCRAFT.
1.1 PURPOSE This publication is intended to provide a system for use by aircraft fuelling ground staff to assist with the delivery of the correct fuel grade to an aircraft during overwing fuelling. This system consists of procedures as well as specific equipment that shall be used to comply with this recommended practice. 1.2 REASONS FOR A MISFUELLING PREVENTION PROGRAM Delivering the incorrect grade of fuel into an aircraft is termed a misfuelling. The risk of delivering the wrong grade of fuel exists because most General Aviation (GA) aircraft and some airline type aircraft are overwing fuelled and can therefore be potentially fuelled with avgas or jet fuel fuelling equipment. The serious consequences of misfuelling include: — Total engine failure due to knock damage if jet fuel is delivered into a spark ignition piston engine powered aircraft that requires avgas. — Ignition failure if avgas is delivered into a compression ignition (diesel) piston engine powered aircraft that requires jet fuel. — Vapour lock and engine failure due to fuel starvation if avgas is delivered into a turbine engine powered aircraft that requires jet fuel. Many turbine engines are capable of operating on avgas, but such operation is strictly controlled as described in the Pilot Operating Handbook.
There are many documented cases of misfuelling and a variety of causes have been identified. In the majority of these incidents there was a lack of grade confirmation, meaning that the fuelling staff did not confirm with the customer the grade of fuel required. There are many similar looking aircraft in operation internationally. Examples include – Piper Mirage (avgas) and Piper Meridian (jet fuel), Cessna 404 Titan (avgas) and 441 Conquest (jet fuel) – where visual appearance alone cannot be relied on to identify which grade of fuel the aircraft requires. Greater numbers of diesel powered aircraft are now being manufactured and in some cases existing aircraft with spark ignition piston engines are being converted to diesel engines. Aircraft fitted with diesel engines are very similar in appearance to aircraft fitted with spark ignition piston engines making visual identification very difficult. In addition, the filling ports on modified aircraft may not have been replaced with the larger diameter airframe fuelling port associated with aircraft requiring jet fuel. The consequences of fuelling these aircraft with avgas can be catastrophic. In some cases, grade confirmation did occur and wing decals were fitted on the aircraft, but the refuelling vehicle/dispenser cabinet used contained the wrong grade of fuel. Clearly there is a need for a comprehensive set of procedures to address the many possible causes of misfuelling.
2.2.3 Grade/product names Standard product names shall be used by all site staff to avoid confusion. It is not uncommon for customers to use unusual or abbreviated product names which can lead to confusion. This is particularly apparent where customers have operated internationally 1 or may only use one grade of fuel in their fleet and may not be aware of the importance of grade confirmation. Orders received from customers (or from instructions relayed via other members of staff) which do not use these product names shall be clarified. Orders such as “aviation fuel” or “gasoline”, etc., have the potential to cause the delivery of the incorrect grade of product. Refuelling staff shall only accept verbal fuel grade notification from the customer when there are wing grade decals fitted adjacent to the fuelling point of each aircraft fuel tank to be filled. 2.2.4 Use of wing decals Grade confirmation also occurs at the time of fuelling via the use of wing grade decals. The refuelling staff shall confirm, prior to commencement of fuelling, that the aircraft wing grade decal is the same grade as in the refuelling vehicle/equipment by observing the grade decal on the refuelling vehicle/equipment. Fuelling shall not commence unless they are the identical grade. Where wing grade decals are not fitted, the fuelling shall only progress when either: 1. The customer fits the wing decals or 2. The customer completes a written Fuel Order Form – refer to sections 2.3 and 2.4. 2.3 WING DECALS Wing decals should be designed as shown in Annex A and shall be readily available at all airport locations. Customers should be encouraged to fit and regularly replace wing decals.