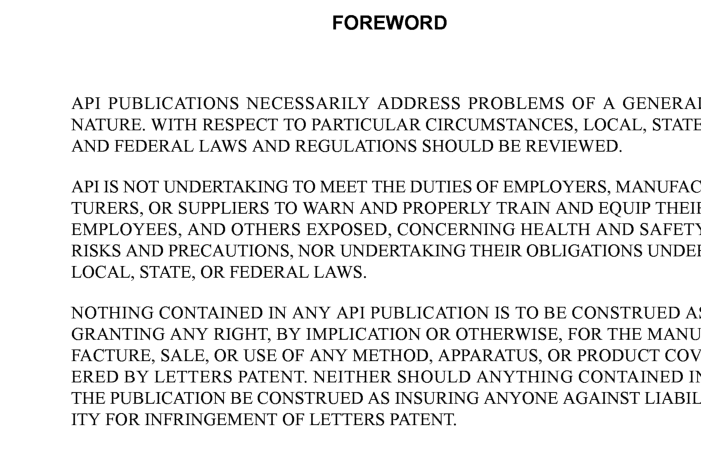 API DR 145-2002 pdf download.Identification of Oils that Produce non-Buoyant In Situ Burning Residues and Methods for their Recovery.
The study was initiated in response to the concern that the residue from an in situ burn could sink and cause environmental damage at the sea bottom. Previous in situ burning experiments failed to note the possibility of residue sinking because the starting oil slick was relatively thin, usually on the order of one or two centimeters. Concerns started to develop in the early 1990s when two separate tanker spills involving heavy crude accidentally caught fire, bumed, and produced large quantities of residue that did indeed sink. More recent laboratory work has indicated that there is a large range of oils that may produce non-buoyant residues after an in situ burn involving thick slicks. In this study, the results of small-scale burning experiments were used to develop correlations to predict burn residue densities for specific oils. When applied to more than 1 O0 international crude oils it was found that about half would tend to float, and the other half would tend to sink in sea water once the residue cooled to ambient temperatures. It should be noted that this finding is based on the assumption that the laboratory-scale bum experiments are scalable to large bums in the field, an assumption that should be verified through further tests with large-scale bums. It was also concluded that no simple method exists for controlling the density of the residue. It may be possible to use skimmers or sorbents to recover the residue immediately following an in situ burn; however, surface countermeasures would only be applicable for a short period-a maximum of 30 minutes-before the residue cooled to ambient temperatures and began to sink. A more realistic countermeasure would be to suspend a fine-mesh net from the bottom of the fire- containment boom, such that it extends across the apex of the burn area. This might allow the capture of bum residues as they cool, become more viscous, and start to sink.
The three most important factors that determine whether an ISB residue will sink or not are the properties of the starting oil, its thickness and the efficiency of the bum process. Some oils that are already relatively heavy will certainly produce residues that will sink in seawater, but only if the bum process is efficient and uninterrupted. The purpose of this section of the report is to predict which oils will produce non-buoyant residues if the burn process is assumed to be “efficient.” Here “efficient” means as efficient as that experienced in controlled, small-scale burns. It is theoretically possible to control burn efficiencies operationally in the field and thereby control the density of the bum residue. These operational possibilities are dealt with in the next section. CONFLICTING THEORIES OF INSITU BURNING (The following is a summary of the discussion in S.L. Ross, 1995.) In situ buming of an oil slick on water proceeds because the hydrocarbon vapor above the liquid bums. The key process is radiative heat transfer from the flame back to the surface of the slick. Some of this heat transfers through the slick to the underlying water, but most vaporizes the liquid hydrocarbons, which rise to mix with air above the slick. Oxidation then occurs, releasing heat to continue the buming process. Once ignited, a buming thick oil slick reaches a quasi-steady-state in which the vaporization rate sustains the necessary heat transfer back to the slick surface. There is uncertainty about the process by which oil vaporizes during in situ buming. Three possibilities exist: (1) Batch Distillation, (2) Equilibrium Flash Vaporization (EFV), or (3) a combination of the two. In Batch Distillation the lightest, most volatile components are boiled off from the entire slick first, followed by progressively heavier, less volatile components.