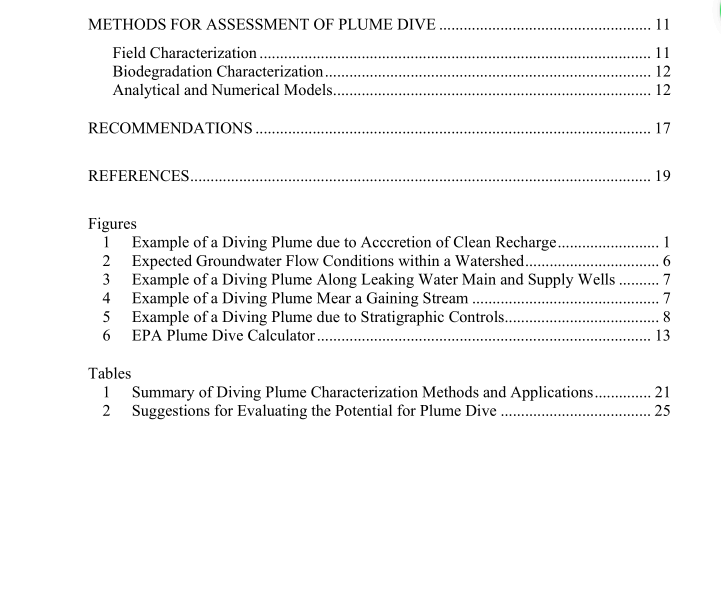 API Bull 24-2006 pdf download.Downward Solute Plume Migration: Assessment, Significance, and Implications for Characterization and Monitoring of “Diving Plumes”.
Diving plume occurrence can be identified by analyzing depth-discrete shallow groundwater samples for dissolved oxygen, iron, methane, or other parameters that may indicate the presence of overlying unaffected groundwater versus groundwater affected by hydrocarbons or other contaminants. Clean recharge water will generally contain concentrations of dissolved oxygen greater than 1 milligram per liter (mg/l), iron concentrations less than 0.5 mg/l, and methane concentrations less than 0.1 mg/l. For hydrocarbon-affected groundwater, dissolved oxygen will be depleted and iron and methane concentrations will generally be above 1 mg/l. Depending on the age of the source, this electron-acceptor depleted “shadow” zone may extend downgradient of the current extent of the BTEX or MTBE plume. Detecting this zone can increase confidence that the monitoring network is located in the probable path of the plume. Dissolved organic carbon will also tend to be low (less than 2 mg/l) for unaffected water, and will be elevated (often above 10 mg/l) in hydrocarbon plumes (Weaver and Wilson 2000). Care must be taken when collecting groundwater samples for dissolved oxygen analyses and other redox- sensitive species. Samples collected with bailers will be oxygenated and are not representative of groundwater geochemical conditions. For contaminants that degrade in aerobic and/or anaerobic conditions, analyzing samples for the presence of daughter products will assist in identifying plume dive. For example, in aerobic geochemical conditions, MTBE has been known to degrade to tertiary-butyl alcohol (TBA). In these conditions, if a plume is diving, but downgradient portions include only TBA and not MTBE, sampling and analysis for MTBE only may falsely indicate the plume is not diving. Analytical and Numerical Models Ratio of Recharge Rate to Groundwater Discharge Rate This approach is based on a conceptual model of vertical plume migration as a result of recharge accumulation at the water table.
For example, if the distance from a source to a downgradient monitoring well is 1,000 feet, and the downgradient monitoring well screen extends 10 feet below the water table, the recharge accretion would need to be greater than 1 percent of the ambient horizontal groundwater velocity for the plume to fully dive below the well screen, resulting in a false negative analytical result from the monitoring well. If the well were only 500 feet downgradient, the accretion rate would have to be greater than 2 percent of the recharge rate to produce a false negative result. For the case where the well is 500 feet downgradient of the source, if the horizontal velocity were 100 feet per year, then the accretion rate would need to exceed 2 feet per year for the plume to dive below the monitoring well. Assuming a total porosity of 25 percent, this condition would require the net recharge exceed 6 inches per year. Data requirements for this analysis include estimates of groundwater velocity, which is calculated from hydraulic conductivity, hydraulic gradient, and effective porosity. Hydraulic gradients can be calculated from monitoring well water level data, or in the absence of any site-specific data, they can be estimated from regional groundwater potentiometric maps (if available). Hydraulic conductivity can be estimated from published values based on lithologic type, or better, from site-specific information obtained from aquifer testing (Stallman 1971; Kruseman and DeRidder, 1991). Typically, porosity is estimated from published values based on lithologic types (Fetter 1988, USGS 1989). Representative values for net recharge may be available from regional groundwater management authorities or regional groundwater studies. Many site-specific methods are available to estimate diffuse recharge from infiltration of precipitation (API, 1996). Often, recharge is expressed as a percentage of total annual rainfall accumulation.