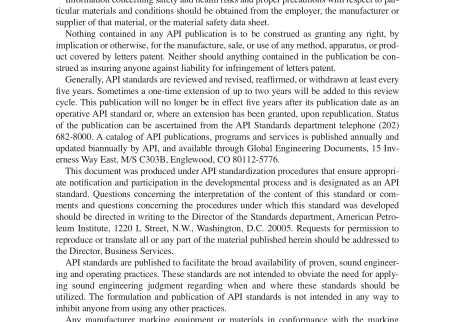 API 941-2004 pdf download.Steels for Hydrogen Service at Elevated Temperatures and Pressures in Petroleum Refineries and Petrochemical Plants.
5.4 EFFECT OF SECONDARY STRESSES High temperature hydrogen attack can be accelerated by secondary stresses, such as thermal stresses or those induced by cold work. High thermal stresses were considered to play a signiÞcant role in the high temperature hydrogen attack of some 2.25Cr-1Mo steel piping. 24 Other 2.25Cr-1Mo steel piping in the same system, subjected to more severe hydrogen partial pressures and temperatures, was not attacked. The effect of cold work was demonstrated by Vitovec in work sponsored by API and summarized in API Publication 940. 6 Vitovec compared speciÞc gravities of SAE 1020 steel with varying degrees of cold work tested in 900 psi (6.2 MPa) hydrogen at 700¡F (371¡C), 800¡F (427¡C), and 1000¡F (538¡C). The decrease in speciÞc gravity over time indicates the rate at which internal Þssures produced by high tempera- ture hydrogen attack are developed. Annealed samples (0% strain) had an incubation period fol- lowed by a decrease in speciÞc gravity. Steels with 5% strain had shorter incubation periods, and speciÞc gravity decreased at a more rapid rate. Steels with 39% strain showed no incuba- tion period at any test temperature, indicating that Þssuring and cracking started immediately upon exposure to hydrogen. These tests are considered signiÞcant in explaining the cracks sometimes found in highly stressed areas of an other- wise apparently resistant material. In addition, Cherrington and Ciuffreda 25 have emphasized the need for removing notches (stress concentrators) in hydrogen service equipment.
5.6 EFFECT OF STAINLESS STEEL CLADDING OR WELD OVERLAY The solubility of hydrogen in austenitic stainless steel is about an order of magnitude greater than for ferritic steels .27 The diffusion coefÞcient of hydrogen through austenitic stainless steel is roughly two orders of magnitude lower than for ferritic steels. 28, 29 A sound, metallurgically bonded auste- nitic stainless steel cladding or weld overlay can reduce the effective hydrogen partial pressure acting on the base metal. Ferritic or martensitic claddings or weld overlays have little or no beneÞt in reducing the hydrogen partial pressure acting on the base metal. The amount of hydrogen partial pressure reduction depends on the materials and the relative thickness of the cladding/weld overlay and the base metal. The thicker the austenitic stainless steel barrier is relative to the base metal, the better. 30 Archakov and Grebeshkova 31 mathematically considered how stainless steel corrosion barrier layers increase resistance of carbon and low alloy steels to high tem- perature hydrogen attack. There have been a few instances of high temperature hydrogen attack of base metal that was clad or overlayed with austenitic stainless steel. All of the reported instances involved C-0.5Mo steel base metal. In one case, 32 high tem- perature hydrogen attack occurred in a reactor vessel at a noz- zle location where the C-0.5Mo base metal was very thick relative to the cladding/overlay.
6 Inspection for HTHA The selection of optimum inspection methods and frequen- cies for high temperature hydrogen attack in speciÞc equip- ment or applications is the responsibility of the user. The information below and in Tables D-1 and D-2 are intended to assist the user in making such decisions. Experience with steels operated below their respective Fig- ure 1 Nelson curves has been good. Consequently, most users do not inspect equipment for high temperature hydrogen attack damage unless it has been operated near or above its curve. A high temperature attack inspection program should also consider equipment that operates infrequently above its curve (e.g., operations such as Òhot hydrogen strippingÓ in hydroprocessing reactors and associated piping and equip- ment). Only a small number of documented instances of high temperature hydrogen attack occurring at conditions below the curves have been reported to the API (see Appendixes A, B, and C). Most of these have involved C-0.5Mo steel. 33 Periodic inspection of C-0.5Mo steel equipment and piping should be considered if operated above the carbon steel curve, based on factors such as relative position of the oper- ating parameters versus the carbon steel curve, consequence of failure, presence of cladding, prior heat treatment, etc. Because HTHA is time dependent, existing C-0.5Mo steel equipment and piping may continue to deteriorate with time, if susceptible. As this equipment and piping age the owner should consider increasing the inspection frequency. See Appendix A. High temperature hydrogen attack damage may occur in welds, weld HAZs, or base metal. Even within these speciÞc areas, the degree of damage may vary widely. Consequently, if damage is suspected, then a thorough inspection means that representative samples of these areas be examined.