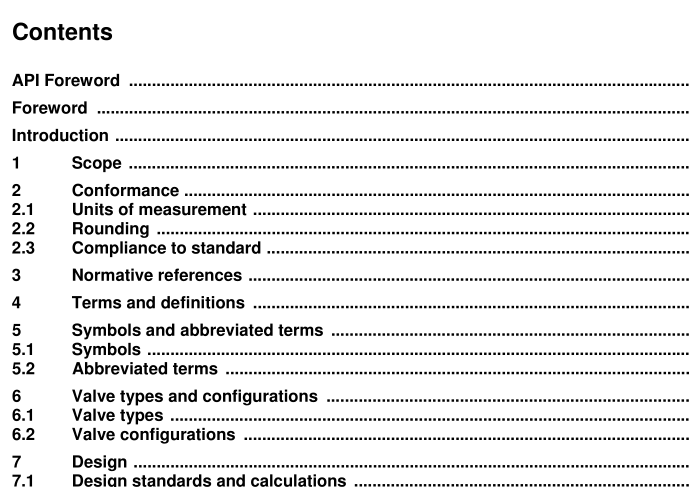 API 6D-2009 pdf download.Specification for Pipeline Valves.
1 Scope This International Standard specifies requirements and provides recommendations for the design, manufacturing, testing and documentation of ball, check, gate and plug valves for application in pipeline systems meeting the requirements of ISO 13623 for the petroleum and natural gas industries. This International Standard is not applicable to subsea pipeline valves, as they are covered by a separate International Standard (ISO 14723). This International Standard is not applicable to valves for pressure ratings exceeding PN 420 (Class 2 500). 2 Conformance 2.1 Units of measurement In this International Standard, data are expressed in both SI units and USC units. For a specific order item, unless otherwise stated, only one system of units shall be used, without combining data expressed in the other system. For data expressed in SI units, a comma is used as the decimal separator and a space is used as the thousands separator. For data expressed in USC units, a dot (on the line) is used as the decimal separator and a comma is used as the thousands separator. 2.2 Rounding Except as otherwise required by this International Standard, to determine conformance with the specified requirements, observed or calculated values shall be rounded to the nearest unit in the last right-hand place of figures used in expressing the limiting value, in accordance with the rounding method of ISO 31-0:1992, Annex B, Rule A. 2.3 Compliance to standard A quality system should be applied to assist compliance with the requirements of this International Standard. NOTE ISO/TS 29001 gives sector-specific guidance on quality management systems. The manufacturer shall be responsible for complying with all of the applicable requirements of this International Standard. It shall be permissible for the purchaser to make any investigation necessary in order to be assured of compliance by the manufacturer and to reject any material that does not comply.
4 Terms and definitions For the purposes of this document, the following terms and definitions apply. 4.1 ASME rating class numerical pressure design class defined in ASME B16.34 and used for reference purposes NOTE The ASME rating class is designated by the word “class” followed by a number. 4.2 bi-directional valve valve designed for blocking the fluid in both downstream and upstream directions 4.3 bleed drain or vent 4.4 block valve gate, plug or ball valve that blocks flow into the downstream conduit when in the closed position NOTE Valves are either single- or double-seated, bi-directional or uni-directional. 4.5 breakaway thrust breakaway torque maximum thrust or torque required to operate a valve at maximum pressure differential 4.6 by agreement agreed between manufacturer and purchaser 4.7 double-block-and-bleed valve DBB single valve with two seating surfaces that, in the closed position, provides a seal against pressure from both ends of the valve with a means of venting/bleeding the cavity between the seating surfaces NOTE This valve does not provide positive double isolation when only one side is under pressure. See double- isolation-and-bleed valve (4.8). 4.8 double-isolation-and-bleed valve DIB single valve with two seating surfaces, each of which, in the closed position, provides a seal against pressure from a single source, with a means of venting/bleeding the cavity between the seating surfaces NOTE This feature can be provided in one direction or in both directions. 4.9 drive train all parts of a valve drive between the operator and the obturator, including the obturator but excluding the operator
4.19 obturator closure member part of a valve, such as a ball, clapper, disc, gate or plug that is positioned in the flow stream to permit or prevent flow 4.20 operator device (or assembly) for opening or closing a valve 4.21 packing gland component used to compress the stem packing 4.22 position indicator device to show the position of the valve obturator 4.23 piggability capability of a valve to permit the unrestricted passage of a pig 4.24 powered actuator powered operator electric, hydraulic or pneumatic device bolted or otherwise attached to the valve for powered opening and closing of the valve 4.25 pressure class numerical pressure design class expressed in accordance with either the nominal pressure (PN) class or the ASME rating class NOTE In this International Standard, the pressure class is stated by the PN class followed by the ASME rating class between brackets. 4.26 pressure-containing parts parts, whose failure to function as intended results in a release of contained fluid into the environment 4.27 pressure-controlling parts parts, such as seat and obturator, intended to prevent or permit the flow of fluids 4.28 process-wetted parts parts exposed directly to the pipeline fluid 4.29 reduced-opening valve valve with the opening through the obturator smaller than at the end connection(s) 4.30 seating surfaces contact surfaces of the obturator and seat which ensure valve sealing 4.31 stem part that connects the obturator to the operator and which can consist of one or more components