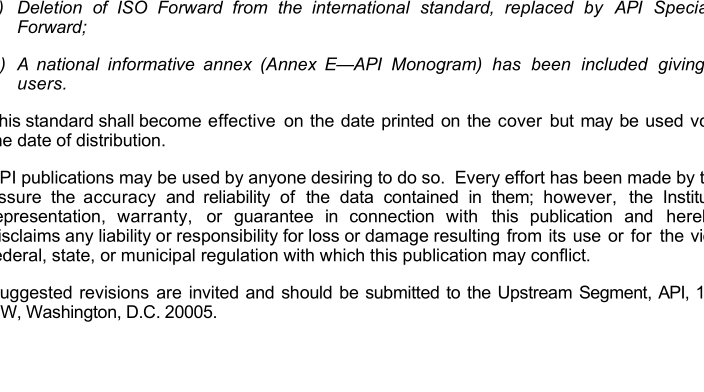 API 6D 2002 pdf download.Pipeline Valves API Specification 6D, Twenty-second Edition January 2002 ISO 14313: 1999, Petroleum and Natural Gas Industries—Pipeline Transportation Systems— Pipeline Valves.
1 Scope This International Standard specifies requirements and gives recommendations for the design, manufacturing, testing and documentation of ball, check, gate and plug valves for application in pipeline systems meeting the requirements of ISO 1 3623 for the petroleum and natural gas industries. Valves for pressure ratings exceeding PN 420 (Class 2500) are not covered by this International Standard. Annex A of this International Standard provides guidelines to assist the purchaser with valve type selection and specification of specific requirements when ordering valves. 2 Normative references The following normative documents contain provisions which, through reference in this text, constitute provisions of this International Standard. For dated references, subsequent amendments to, or revisions of, any of these publications do not apply. However, parties to agreements based on this International Standard are encouraged to investigate the possibility of applying the most recent editions of the normative documents indicated below. For undated references, the latest edition of the normative document referred to applies. Members of ISO and IEC maintain registers of currently valid International Standards. NOTE Non-International Standards may be replaced, by agreement, with other recognized and equivalent national or industry standards. ISO 7-1 , Pipe threads where pressure-tight joints are made on the threads—Part 1: Dimensions, tolerances and designation. ISO 1 48, Steel — Charpy impact test (V-notch). ISO 228-1 , Pipe threads where pressure-tight joints are not made on the threads—Part 1: Dimensions, tolerances and designation. ISO 228-2, Pipe threads where pressure-tight joints are not made on the threads—Part 2: Verification by means of limit gauges. ISO 5208, Industrial valves—Pressure testing of valves. ISO 7005-1 , Metallic flanges—Part 1: Steel flanges. ISO 1 0474, Steel and steel products—Inspection documents. ISO 1 0497, Testing of valves—Fire type-testing requirements.
3 Terms and definitions For the purposes of this International Standard, the following terms and definitions apply: 3.1 ANSI rating class numerical pressure design class defined in ASME B1 6.5 and used for reference purposes NOTE The ANSI rating class is designated by the word “Class” followed by a number. 3.2 bi-directional valve valve designed for blocking the fluid in both downstream and upstream directions 3.3 bleed drain or vent 3.4 block valve gate, plug or ball valve that blocks flow into the downstream conduit when in the closed position NOTE Valves are either single- or double-seated, bi-directional or uni-directional. 3.5 breakaway thrust breakaway torque thrust or torque required for opening a valve with maximum pressure differential 3.6 by agreement agreed between manufacturer and purchaser 3.7 double-block-and-bleed (DBB) valve valve with two seating surfaces which, in the closed position, blocks flow from both valve ends when the cavity between the seating surfaces is vented through a bleed connection provided on the body cavity 3.8 drive train all parts of a valve drive between the operator and the obturator, including the obturator but excluding the operator
3.1 0 full-opening valve valve with an unobstructed opening capable of allowing a sphere or other internal device for the same nominal size as the valve to pass 3.1 1 handwheel wheel consisting of a rim connected to a hub, for example, by spokes, and used to operate manually a valve requiring multiple turns 3.1 2 locking device part or an arrangement of parts for securing a valve in the open and/or closed position 3.1 3 manual actuator manual operator wrench (lever) or handwheel with or without a gearbox 3.1 4 maximum pressure differential (MPD) maximum difference between the upstream and downstream pressure across the obturator at which the obturator may be operated 3.1 5 nominal pipe size (NPS) numerical inches designation of size which is common to components in piping systems of any one size NOTE The nominal pipe size is designated by the letters NPS followed by a number. 3.1 6 nominal pressure (PN) class numerical pressure design class as defined in ISO 7005-1 and used for reference purposes NOTE The nominal pressure (PN) class is designated by the abbreviation PN followed by a number. 3.1 7 nominal size (DN) numerical metric designation of size which is common to components in piping systems of any one size NOTE Nominal size is designated by the letters DN followed by a number. 3.1 8 obturator closure member part of a valve, such as a ball, clapper, disc, gate or plug, which is positioned in the flow stream to permit or block flow 3.1 9 operator device (or assembly) for opening or closing a valve