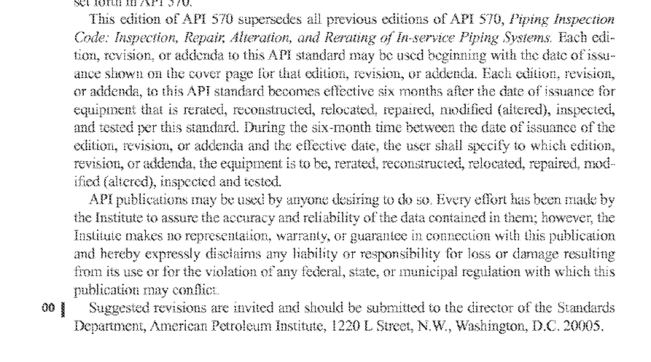 API 570-2003 pdf download.Piping Inspection Code Inspection, Repair, Alteration, and Rerating of In-service Piping Systems .
3.1 alteration: A physical change in any component that has design implications affecting the pressure containing capability or flexibility of a piping system beyond the scope of its design. The following are not considered alterations: comparable or duplicate replacement; the acidition of any reinforced branch connection equal to or less than the size of existing reinforced branch connections; and the addition of branch connections not requiring reinforcement. 3.2 applicable code: The code, code section, or other rec- ognized and generally accepted engineering standard or prac- tice to which the piping system was buit or which is deemed by the owner or user or the piping engineer to be most appro- priate for the situation, including but not limited 10 the latest edition of ASME B31.3. 3.3 ASME B31.3: A shortened form ofASME B313, Pm- cess Piping, published by the American Society of Mechani- cal Engineers. ASME B313 is written for design and construction of piping systems. However, most of the techni- cal requirements on design, welding, examination, and materi- als also can be applied in the inspection, rerating, repair, and alteration of opeming piping systems. When ASME B313 cannot be followed because of its new construction coverage (such as revised or new material specifications, inspection requirements, certain heat ureatments, and pressure tests), the piping engineer or inspector shall be guided by API 570 in lieu of strict conformity to ASME B3L3. As an exampie of intent, the phrase“principles of ASME B31 3”has been employed in API 570, rather than“in accordance with ASME B31.3.” 3.4 authorized inspection agency: Defined as any of the following: a. The inspection organization of the jurisdiction in which the piping system is used. b. Tbe inspection organization of an insurance company that is licensed or registered to write insurance for piping systems. C.
3.6 auxiiary piping: Instrument and machinery piping, typically small-bore secondary process piping that can be iso- lated from primary piping systems. Examples include fush lines, scal oil lines, analyzer lines, balance lines, buffer gas lines, drains, and vents. 3.7 critical check valves: Valves that have been identifed as vital to process safety and must operate reliably in order 10 avoid the potential for hazardous events or substantial conse- quences should a leak OCCut. 3.8 CUR: Corrosion under insulation, including stress corro- sion cracking under insulntion. 3.9 deadlegs: Components of a piping system that nor- mally have no significant fow. Examples include the follow- ing: blanked branches, lines with nommally closed block valves, lines with one end blanked, pressurized dummy sup- port legs, stagnant control valve bypass piping, spare pump piping, level bridles, relief valve inlet and outlet header pip- ing, pump trim bypass lines, high-point vents, sample points, drains, bleeders, and instrument connections. 3.10 defect: An imperfction of a type or magitide exceeding the acceptable cniteria. 3.11 design temperature of a piping system com. ponent: The temperature at which, uncer the coincident pressure, the greatest thickness or highest component rating is required. It is the same as the <iesign temperature defined in ASME B31.3 and other code sections and is subject to the same rules relating to allowances for variations of pressure Or temperature or both. Different components in the same piping system. or circuit may have different design temperatures. in establishing the design tempermture, consideration shall be given to process fuid temperatures, ambient temperatures, heating and cooling media temperatures, and insulation.
3.31 piping circuit: A section of piping that has all points exposed to an environment of similar corrosivity and that is of similar design conditions and construction material. Complex process units or piping systems are divided into piping cir- cuits to manage the necessary inspections, calculations, and record keeping. When establishing the boundary of a partieu- lar piping circuit, the inspector may also size it to provide a practical package for record keeping and performing field inspection. 3.32 piping engineer: One or more persons or organiza- tions acceptable to the owner or user who are knowiedgeable and ecxperienced in the engincering disciplincs associated with evaluating mechanical and material characteristics affecting the integrity and relability of piping components and systems. The piping engineer, by consuling with appropriate special- ists, should be regarded as a composite of all entitics neces- sary to properly address a lechmical requirement. 3.33 piping system: An assembly of interconnected pip- ing that is subject to the same set 0r ses of design condirions and is used to convey, distribute, mix, separate, discharge, meter, control, or snub fuid flows. Piping system also includes pipe- supporting elements but does not include sup- port structures, such as structural frames and foundations.