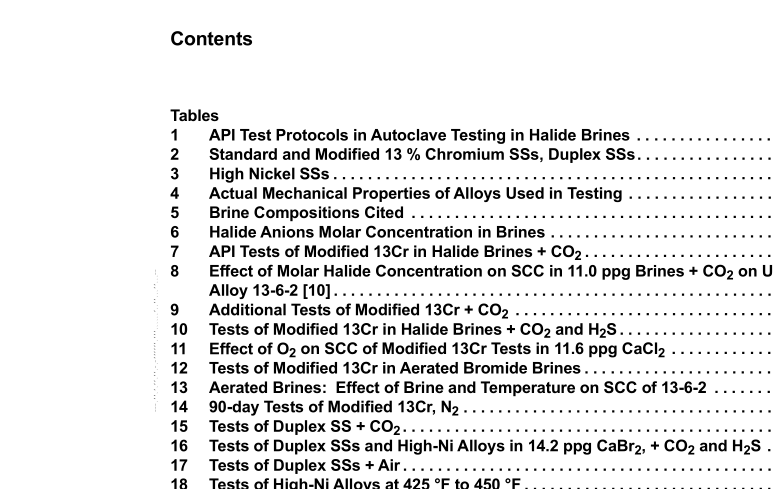 API 13TR1-2017 pdf download.Stress Corrosion Cracking of Corrosion Resistant Alloys in Halide Brines Exposed to Acidic Production Gas.
The annular space between the production tubing and the carbon steel casing is filled with a dense fluid, typically a halide salt. In wells with corrosion resistant alloy (CRA) tubing, SCC of the CRA tubing OD or auxiliary components has occurred in a number of wells. Halide brines have densities up to 2.2 g/ml (19.2 lb/gal or ppg) and contain a number of additives. A previous publication linked some field failures to the addition of SCN-corrosion inhibitor. [1] Additional field failures in CaCl 2 brines have been linked to ingress of acidic gas containing CO 2 and H 2 S and to exposure to air. SCC of martensitic stainless steel (SS), (13 % Cr, 6 % Ni, 2 % Mo) was attributed to downhole leakage of acidic gas [2], whereas SCC of a duplex SS tubing (25 % Cr, 3 % Mo) was attributed to air in the gas cap above column of brine. [3] To understand the effects of brine compositions on the CRAs, a joint industry project was formed under the auspices of the American Petroleum Institute (API). It has been known as the CRAs in Brine Testing Program. Under its auspices, work has been underway for a number of years on understanding the interaction of brine chemistry and CRAs. The current paper evaluates the SCC risks of a range of CRAs in various halide brine compositions for the case of exposure to acidic production gas (CO 2 +H 2 S). Also evaluated are SCC risks due to air exposure. However, the testing became focused on a group of martensitic stainless steels alloyed with Ni and Mo, that are collectively referred to as modified 13Cr martensitic SS, or alternatively in some publications as super (S13Cr) martensitic SSs. Most tests evaluated the as-received brine, excluding proprietary additives such as corrosion inhibitor or oxygen scavengers. For completeness and comparison, test results provided by member companies in the API program or in the publications are cited; these test protocols may be different from those in the API test protocols hence, where that occurs, significant differences are noted.
4 Results Test results are segregated according to alloy group and exposure conditions. Exposure to the acidic gas environments were either: 1) CO 2 saturation (100 psi or 500 psi), or 2) saturation with CO 2 + H 2 S (0.15 psi or 1.5 psi H 2 S). Saturation to specific partial pressures of CO 2 and H 2 S represent halide brine in equilibrium with the partial pressure of these acid gases leaking into the brine-filled annulus. Additional N 2 tests were made with a N 2 purge and gas cap, or/and an air gas cap (0.15 psi or 3.0 psi O 2 after purging), or both. Test results in the tables are identified either as a pass, “O” or a failure, “X”. The “X” designation includes crack-like features at least 25 mm deep that were observed on metallurgical mounts. For the case of multiple specimens tested, the designation X[3] or O[4] indicates the number of failures or passes in a group of identical specimens. Projection of acceptable field performance requires no cracking in a 30-day test, which is consistent with CRA test requirements for use in exposure to produced gas containing H 2 S. [4] The 14-day tests, which were intended to explore test variables, resulted in many failures in tests of modified S13Cr and are therefore included in the tables. Test results from other laboratories, except as noted, met the following criteria: (1) free of SCN – or titratable oxidant and (2) insulation from other alloys. Test results provided by member companies are cited [9] as Company A, B, C, D, and F. In these environments, standard 13Cr-L80 was found to be fully resistant to SCC, and is therefore not included in martensitic SS test results. In addition, severe tests containing SCN – were reported earlier. [1] No SCC was observed in eight additional API tests following brine exposure to air or acidification with CO 2